She has been Living 50 Years with MS 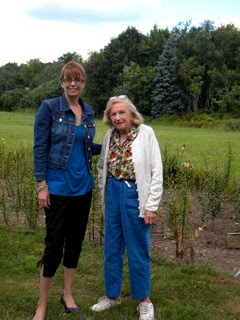 Guest Post by Deborah from What Matters Most is Kindness,  she shared this story with me about her Mom.  It was encouraging to me, so I hope you enjoy it also....


I’m writing about my mother, Mary who is 80 years old and is a living testament that people can live with MS.  My mother doesn’t remember when she was diagnosed, but she believes she was in her early thirties.  She remembers going to the Doctor’s office and him telling her that she will more than likely spend the rest of her life in a wheel chair.
Well, if you know my Mom, she didn’t listen to him, she kept on with her daily activities as if nothing was wrong. She ran a horse farm and a large dog kennel.  She was president of the local Women’s Club for years, the town Finance committees and so on… Fortunately for my mother, her MS must have gone into remission.  A little was know about this disease 50 years ago.
When my mother was around 73 or 74 she started loosing muscle mass and several neurologists couldn’t figure out why.  Of course, my mother never mentioned that she had MS, or that is what the doctor said.  It wasn’t until her fifth neurologist had said, maybe you have MS and a light went off!  Then my mother remembered that years ago, Dr. Spear said the same thing.  She told her doctor that and after a few tests, the MS did show up, in her brain.  My mother would not let them do a spinal tap because she has a very bad back and has had surgery on her back for her arthritis.  She has also had two total knee replacements.
Fast-forward to today, my mother still runs a horse farm, the same one she just bought when she was first diagnosed.  Yes, she needs her cane (a different one for each outfit), because she has a terrible limp, but it doesn’t seem to bother her at all.  She still falls and I worry about that, but she only blames herself…My mother has one of the best, positive attitudes of anyone I know. Nothing ever seems to get her down and she never feels sorry for herself.   I did put a bedroom down stairs for her in her home, but she won’t use it!  She says she doesn’t need it yet!
The only thing she misses is dancing. She used to love to dance!
She was happy that I was writing about her because people can live full and happy lives with MS.

a wonderful and inspiring story and also proof that stuff could get worse, but there is a way to deal with it. thanks for sharing her story, i will pop by her blog. blessings on you today

Wow, she sounds like a perfect example of how a state of mind can get you SO far. We all need to be reminded of that often. Thanks for sharing this story.

Thanks for sharing. She is an inspiration.
Cheers

Hi, I'll have to show my mother this post! Thanks for sharing my Mom's story. Have a great day!
xxoo
Deborah

Thank you, Kim. She sounds like a great woman, and one who was very fortunate in being able to live a full life despite the MS.
Peace,
Muff

Such a wonderful testimony of defiance and determination

Well, that was some tribute..I like how she forgot she had MS. It was really inspiring. Thanks Kim for having a guest blogger. I hope you are doing well!
Take good care!

Before I could even leave a comment I had to call my momma and see that she was OK. Our mommas are so special. Thanks for sharing about your momma.

I know Deborah, we are followers!! In fact, I helped her out with a cane for her mom once. She is so sweet! This is such an inspiring story!!!

What an inspiring story... Thanks SO much for sharing.
Hugs,
Betsy

Wonderful and inspirational!! A lesson for us all!!
Keep your attitude positive and you can overcome much in your life!
Hugs
SueAnn

This is a wonderful, inspiring story! It is evident that she is a fighter who makes the most out of what life throws at her :) Thank you for sharing this guest blogger's story! Thank you also for visiting my recent WW post :) God bless!

What a great story of am amazing woman, truly truimphant, thanks for sharing:)