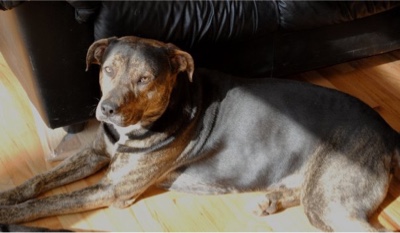 When this photo of my beloved horse dog came up on my Facebook memories from 2010.....I was reminded of when I was trying to find Donnie a good home back in 2010!
I am glad it was my good home I found. I was feeling so stressed and felt I can't handle a big dog in the house....little did I know.

It did get worse that year when hubs was laid off from his job!.

Thankfully he did get a job after 8 months finally!  However it was a night shift job for 3 years.....It was comforting that I had my big horse dog in the house!
My Donny has protected me in ways I will never know.....

The most memorable time was when a water moccasin snake was coming toward me as my wheelchair was stuck by the fence.....he bit the snake in half when the snake got 2 feet from me!!  And to think I was trying to find Donny another home! 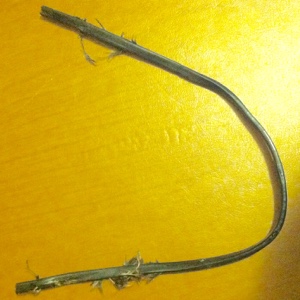 On December 24th, 2015 it came a bad storm with a lot of lightening ....I said "boy that lightening sure was close".  Since the net, tv, and phone would not  work after that......I called our provider!

When the AT&T guy came in the afternoon.  He showed us the phone box since it had been burned out from where the lightening struck!  and brought us a small piece of wire which is pictured above.

The repairman said we were hit hard, we sure were lucky.  We were so blessed and we went half the day not even knowing it!
We did lose a dvr, printer and Ooma phone box.....and a week of aggravation with them finally replacing the line that had been burned out.....but it sure could have been worse!
Kim - Kim@stuffcould.... at 12:02 AM 7 comments: 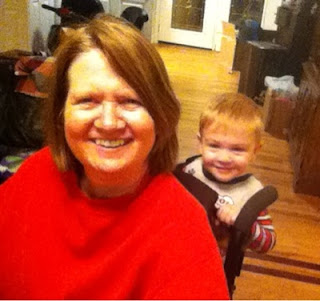 My new wheelchair makes it much easier for me to keep my precious grandson!

Being a 2 year old he had fun climbing on it.  I finally started creeping along with him on the back while he was giggling himself silly! 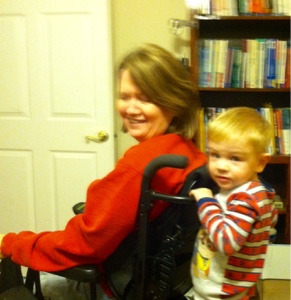 Hubs took this pic before I remembered the selfie stick that my daughter gave me for Christmas.....