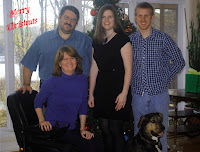 I was about 20 years old when I was taking a shower and thought this is weird....My arm is numb....I will check it out if it does not go away however my arm did return to normal after a week.   Just the beginning of how many strange things do go away with MS.

Several months later when I was typing at work another strange event....I cannot see out of one eye clearly.  It had a gray blob in the center of the eye....it was also painful when moving the eye.

This time I did go to the Eye Doctor and he examined it.  The doctor said my eye was ok but if it does not clear up in a week....He would give me a prescription of steroids.  I was confused but it cleared up so again my young and fine thinking....

Later in the year  I had double vision (I saw 2 of everything).  I was also numb from head to toe on my right side.  Later on I found out that my family was worried about me having a brain tumor....but I still thought I was fine even though strange things were happening to my body....it was becoming normal to me??

My Dad said we are going to the Doctor but it was the day after Thanksgiving.  I said no one will be open during a holiday.
Well the same eye doctor was open.  After the eye exam he took Dad in another room....Strange again....I was 20ish and an Adult.....so I thought why?

Dad did not want to tell me but I kept insisting that it was my body.  Dad said "the doctor thinks it is MS"....my first thought was "I do not want to be Jerry’s kids"......but that is MD?....so what is MS? No computers back then.

My eye doctor had put the pieces of the puzzle together and sent me to a Neurologist. They had no tests or treatment around 1980 for Multiple Sclerosis. I kept working with MS for 10 or so years.

I met my husband after I had been diagnosed with MS a few years. He liked my attitude about the MS, “don’t let it ruin my life” (ignore it) was my attitude back then.   After time MS will not let you ignore it....then we had to deal with MS.

We married 26 years ago and had 2 children!  The doctors did not know if having the kids would do more damage to the MS or not but I thought it would be worth the risk.   So happy I did take that risk....

My Daughter is a 24 year old accountant and my son is a 21 year old Marine. Like any Mom I am proud of my kids.....I do not know how I raised them.   I claim Post Traumatic War Stuff for lack of memory!!!

Miraculously I started walking again but with a walker about 5 years ago. My son did not remember seeing me walk before....Many had thought that I would never walk again....My Chiropractor seems to have played a role in it....The Doctors seem to think the Meds were the reason....However it is God behind it all!
The story continues as life does for 30 years now.

You can read about it on my blog, or catch me on twitter. You can also ‘like’ my page on Facebook too!
No matter what your day is like  remember Stuff could always be worse!
Kim

Hi! My name is Laina Turner-Molaski and I am an advocate for raising awareness for Multiple Sclerosis. My mother suffered for the disease and I am committed to raising awareness so we can work toward finding more ways to fight this disease.

I have an initiative called The MS Project. It’s a book, website, and iPhone app. The official launch is March 14th, 2011 to coincide with National MS week but I am working on building up the website now. I would love to have you do a guest post or spotlight you and your blog on The MS Project site.

You can check out the site at www.themsproject.com and if interested please email me at laina@lainaturner.com

Hey thank you for the wonderful article it had been genuinely useful , I hope you will just publish additional about this ! This topic rocks

Thank you for sharing your story. I think it is important for others with MS to know they are not alone. I went blind twice before being diagnosed. I sometimes think that it is because there are things in the world I would rather not see.

My fav uncle has MS. It was devastating for him because he was a glorious painter. It is great to see people deal with this horrible disease positively.

I ran into you over at Fiftyodd. I have MS also, but I am one of the lucky 15% that seem to have an initial attack and then no additional problems. I had two very nasty attacks in December of 1984 and January 1985. I went from normal to a wheel chair within 36 hours, on my first attack. I responded extremely well to a steroids. Second attack I had vertical nystagmus so bad that I could not recognize who walked into my hospital room. Again I responded very well to steroids. No additional attacks! But I still live with much damage from those first two attacks, but it is not debilitating. Numb hands, bad balance, toe drags every now and again, hot weather kills me, fatigue, numbness and weakness in certain areas and muscles. My vision is OK unless I turn my head sideways then the nystagmus comes back, but that has slowly improved over the years. I think my biggest problems are not physical, but emotional and intellectual. Rage and tears for the emotions. The rage I got under control, the tears have got worse. I make a total fool of myself at funerals. I weep over the smallest things, yet the guy deep inside of me is not sad. He looks on in total amazement when I bust into tears over a Hallmark Christmas movie or at a funeral for someone I don't even know. He is frantically pulling back the sobbing lever and nothing happens.

Intellectually, I suffered a shellacking. My clock speed slowed way down. It takes me a long time to think. IQ? I would estimate I lost easily 10 points and I didn't have much to begin with. Memory? Swiss cheese, not only swiss cheese but dynamic swiss cheese. I can forget my home telephone number at times, yet remember part numbers of fitting I ordered years ago at work, until I need to remember them, then forget it.

Oddly enough, I consider my MS to be a blessing. I came to vastly appreciate my wife, family, life, and God far more with the MS than before. It was something of a wake-up call for me. Although, again, I have been extremely fortunate, I had two very bad attacks 27 years ago, but nothing since, very much a blessing there. You have a nice blog.

Hi Kim, I must say I have taken the stance of my diagnosis as just this "Its all part of the human condition and I will deal with what comes as it comes." However, I must admit the symptoms that are showing up now are scaring the bejesus out of me. I feel like I am loosing my independence slowly. My neurologist can not tell me how long I have suffered with MS because I have had issues with other issues that may have masked the symptoms which would have alerted me of the MS years prior. He estimates I may have had MS for the last 15 to 20 years before being diagnosed. I am currently being treated with Neurontin (600 mg and 400 mg - 2x daily), Baclofen, Avonex Injections (weekly), Ibuprofen and Percocet for pain (as needed which I take only when extreme). It seems like all I do is take medications which do not work. I move around, but my family is concerned that I may fall and refuse to leave me alone for any lengths of time. I appreciate their concern as I do not like being alone for that same fear. I have a cane, a walker, a manual wheel chair and a power chair, but only use them when I feel I am REALLY BAD - to shaky to stand unassisted. I am only 42 years old and my damn pride gets in the way of using my assistance devices. I do not want people saying to me "I am sorry." I hate it when people say that to me or look at me with pity in their eyes. Why do people do that? It is only part of the human condition that we are this way! Do they not REALIZE in Heaven we WILL be whole again? When Heaven is a realization ALL diseases WILL be NO MORE? Is it wrong for me to be so prideful not to want pity or someone to feel sorry for me and for it to anger me when they do? It is my faith in God's promise to make me whole again when His promise of Heaven is a realization that keeps me going and strong! Maybe I don't make sense. Maybe it is my study of psychology and theology that has helped me in my reasoning. OR maybe it is just my blind child-like faith in God and His promises that reassures me, IDK...

honestly, i was diagnosed with MS 3 years ago and i did a simple parasite cleanse twice a year and they have never come back. have you ever done one? a few other natural treatments as well i can share with you. visit my website. all these diseases nowdays have the same symptoms. odd dont you think? so did i. we have already cured two women including myself

felt like reading it once more.. i like the way you write...lot of strength there...cant see more than 4 posts so was not able to catch up :( .... take care ...stay blessed!

Hello. I am currently looking for someone with MS to share their medical reports with me. I am a phd student working on my thesis. I am willing to pay 300 dollars for medical reports. (patients name and identifiable information will be erased.) I hope you are interested : krista7707 at Hotmail dot com

We have some things in common....MS, our age, our spiritual belief, and likely much more.
https://climbingdownhill.wordpress.com/2014/04/22/my-diagnosis-story-part-1/

What is your name? I have been searching your site and read a bunch of your posts, but don't know your name?
http://thepainfreelife.com