This research opportunity sounds interesting, with a good compensation.....

We are currently looking to talk to people who are diagnosed with Multiple Sclerosis (MS) to talk about their experiences. All information remains confidential and no sales are involved!

If you are interested, please copy and paste this link into your browser and complete the preliminary questions. We will be following up within 48 hours of receipt.
https://www.surveymonkey.com/r/TG5TGHJ

If you prefer you may email or call Sue at the contact information below. Thank you in advance for your help and we look forward to hearing from you soon. 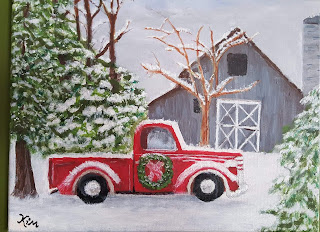 I painted this 11x14” acrylic for my sister Jill.

Merry Christmas to all my blog friends!
Kim - Kim@stuffcould.... at 9:19 AM 11 comments: Links to this post

I was very surprised to win the Chairman’s Award!  And my family was also.....

We had began to think I hadn’t won anything as it was getting toward the end of the ceremony.  My sister Karen was texting my other sisters saying that it was nearing the end with no award for me.  One of the few awards  left was the Chairman’s award and it was left blank in the brochure.  Glen said maybe she won that??

Karen texted,  sorry Kim, but I don’t think she won the Chairman’s award.

About that time they called my name for the very last award at the end of the ceremony, the Chairman’s Award.  I drove my chair up there to receive my award as seen below 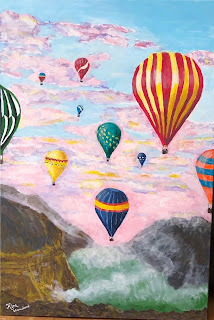 I am entering the above painting in the Georgia Artist with Disabilities art show.  It is  on September 21, 2019 in Atlanta at the Georgia Power building.

This painting will be my second entry..... hoping to place in top 10 but who knows?


LaGrippe Research is inviting individuals diagnosed with Multiple Sclerosis to participate in a 90-minute focus group to discuss several topics related to MS to put towards research. Those that qualify and participate will be compensated $200 as a thank you.
We will be hosting these groups in three different cities:
If you are interested, please fill out our preliminary questions online here: https://ywww.surveymonkey.com/r/TC8WG7G
If you have any questions, please contact our Project Manager Maggie at 847-373-4104 or email Maggie@lagripperesearch.com